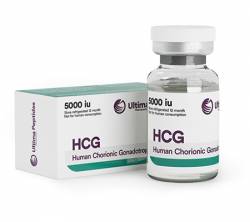 HCG is an injectable drug manufactured by Ultima Pharmaceuticals and containing as active substance Human Chorionic Gonadotropin (hCG). This is a hormone produced during pregnancy that is made by the developing placenta after conception, and later by the placental component syncytiotrophoblast. One of the uses of hCG is to suppress hunger and trigger the human body’s use of fat for fuel. hCG is used also to cause ovulation and to treat infertility in women, and to increase sperm count in men. bodybuilders use it in steroids cycles and in post cycle therapy to lose gain and to increase Testosterone production.

HCG is utilized among bodybuilders and athletes at the end of an anabolic-androgenic steroid cycle to prevent the breakdown of muscle tissue. It is also important in restoring the testes to the normal abilities. Many times after a period of anabolic steroids usage the testes of an athlete may shrink. HCG is effective in returning them to normal size. When used along with a very low-calorie diet, athletes burn off that extra fat over their muscle mass. Females may also use HCG with a very low calorie diet to burn off unnecessary fat.

The average dosage of HCG during a cycle is between 500iu to 3000iu every week (1-3 times per week). If the injection is taken more frequently the blood level of the athlete are more stable while taking it in one shot may increase the estrogen levels caused by the aromatization of normal Testosterone and result in gynecomastia. There are sources showing that some bodybuilders used 6000iu for 6 days, but this is a risky affair and depend on the individual features of men. As post cycle therapy HCG should be used in smaller doses, about 250 – 500iu every day for 2 or 3 weeks. Smaller doses are enough to begin reversal process of testicular atrophy. When starting a cycle of hCG, bodybuilders must follow it for 2 to 3 week range with a least one month off in between and follow this course with no concern. HCG can be used with Clomid or Nolvadex in the PCT and continue using them after HCG is no longer part of the cycle. It is also recommended to start and hCG cycle near the end of a normal steroids cycle, most effective in the last week.

The most serious side effects that may occur while using HCG are: severe pelvic pain, swelling of the hands or legs, stomach pain and swelling, shortness of breath, weight gain, diarrhea, nausea or vomiting. Other common side effects of HCG are: headache, feeling restless or irritable, mild swelling or water weight gain, depression, breast tenderness or swelling; or pain, swelling, or irritation where the injection is given. Among boys the medicine can cause early signs of puberty, such as a deepened voice, pubic hair growth, and increased acne or sweating.

HCG is a hormone that is naturally produced by the female placenta during a normal pregnancy. This medicine’s action is highly similar to luteinizing hormone (LH), because this hormone is known to be able to cause ovulation. If it is combined with other medicines and drugs, HCG is highly effective in helping female patients become pregnant. This drug can also help males patients that are suffering from fertility issues (a treatment with this medicine usually enables such cases to produce a higher amount of testosterone).

HCG is a popular medicine that is regularly prescribed to female patients as part of a regimen that is supposed to induce: Ovulation induction in subfertility that is usually triggered by impaired follicle-ripening or by anovulation. - Luteal phase support. Follicle preparation for puncture in controlled ovarian hyperstimulation programs (this usually occurs in the case of medically assisted reproductive methods and techniques).

HCG is a medicine that is regularly prescribed to male patients because of its ability to induce Hypogonadotrophic hypogonadism. Some patients who were suffering from idiopathic dysspermias have positively responded to a treatment with this medicine. Delayed puberty which is regularly associated with an insufficient function of the gonadotrophic pituitary glands. Cryptorchidism, (not the one that is triggered by an abnormal anatomical obstruction).

HCG is a popular medicine that helps both male and female patients deal with infertility. However, this medicine can also be used for some other purposes (to treat or to prevent some other medical conditions) that have not been listed here.